The Canary Association of Tai Chi Chuan and Chi Kung was founded in 2007, it has been created with the spirit to spread both disciplines in the insular ambit. The Head Instructor Sifu Jordi Moya Pizarro is the president.

The Association represents in Canary Islands the teachings of Grandmaster Doc-Fai Wong, president of the Plum Blossom International Federation and the Master Sun Junqing, director of the Wubaomen Qigong School.

The Canary Association logo is the verol (Aeonium) of the Greek “aionion” that means always alive. This plant can resist in extreme conditions in the desert. The seven leaves that form a rosette over a taunt stem are the symbol of the seven islands in one, Las Canarias. This spiralled model expresses the dynamics and interaction of Yin and Yang which arises from emptiness and then returns in the same way that happened in the macrocosm. The dominant concept is always the circle, since it suggests a perfect unit without beginning or end.

The Internation Federation logo is the national flower of China, the Plum Blossom, symbol of eternity, as it is a flower that flourish in winter, when life is muted. The five petals contain the Choy Li Fut and Tai Chi ideograms. The centre is composed of the Tai Chi symbol which shows the two first inseparable principals, Yin and Yang, representing the universal powers, which are manifested in everything. 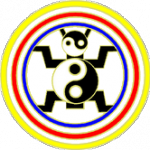 The Wubaomen School logo represents the most elevated level of the authentical Chi Kung, it contains the explanation of this Chi Kung and its stages.

In the centre there is as a human figure formed by two Yin-Yang emblems. The figure is surrounded by three coloured circles on a white background.

Also it represents the four levels in the Wubaomen practice: